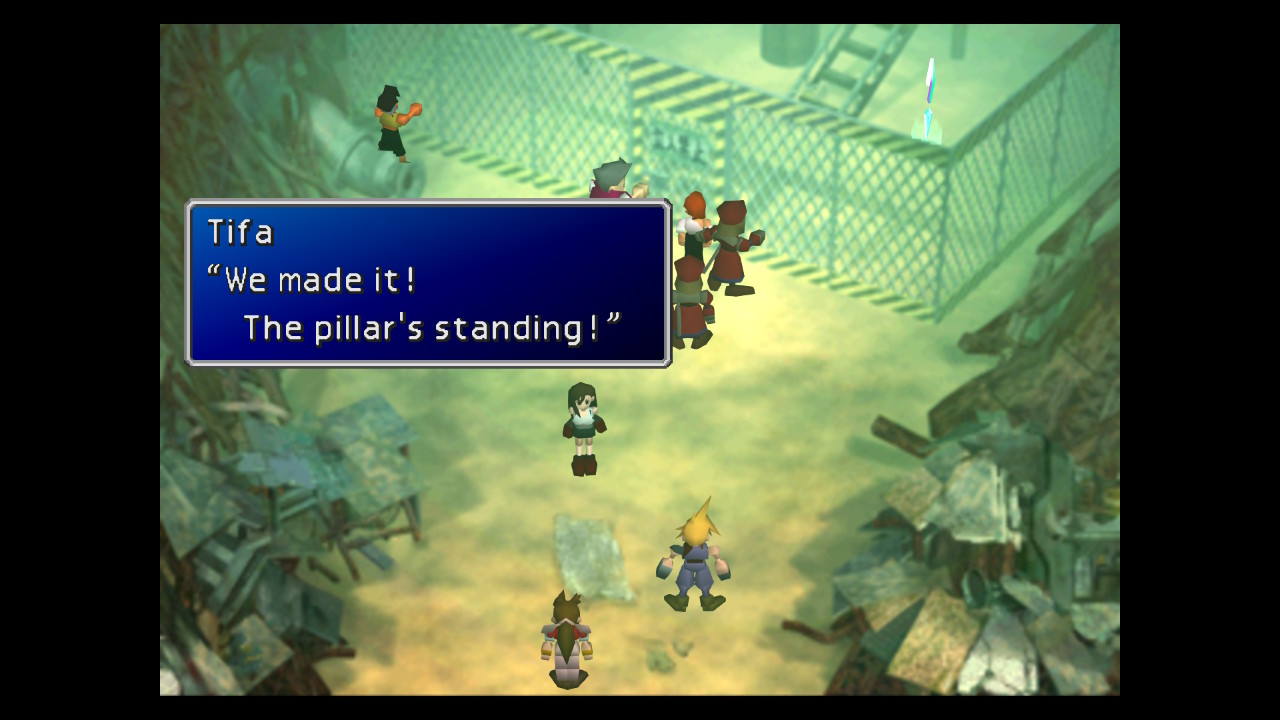 As Cloud and company fall to their doom, we cut to Shinra HQ.
Reeve’s line in English should be “Simply to destroy,” which unfortunately did not get corrected in E PC. Basically, he’s incredulous that the president would go to such lengths just to destroy a such a small group of people.

Heidegger belittles Reeve for being so hesitant.
E PSX is a very literal translation of the Japanese, which E PC revises to sound a bit more natural.

Cloud and the ladies make they’re way through the sewers and train graveyard until they eventually arrive in Sector 7.
The original translation finally uses “pillar” here, as opposed to “support structure.” Either they had some context, or a different translator handled this. I imagine they didn’t make much use of glossaries back when this was translated.

Cloud can talk to the people standing around before heading up the pillar.
This NPC’s line is a little more like “Is the pillar going to be destroyed?” Basically just wondering what’s going to happen.
His next line runs afoul of more context errors. The Japanese is literally just, “(I’m) scared, but for your sake…” So it isn’t clear based on the text what exactly “for your sake” is referring to. It turns out a shop menu opens up after he says this, so it’s actually “(I’m) scared, but (I’m staying here to sell these) for your sake.”

Cloud can also talk to the soldiers standing around.
The English translation sort of gives him the wrong attitude here, like he’s just frustrated with the situation and feeling bad for himself. He’s actually saying that he’s cutting ties with Shinra (because he knows they’re behind this), and giving Cloud permission to enter for once.
Roughly, “Hey! This is my last job (because I’m resigning)! Get up there!” and “I never thought something like this would happen! This feels awful! I’m turning in my letter of resignation tomorrow.”
Though the Japanese doesn’t specifically say that he’s quitting because of Shinra’s actions, we can infer this through the fact that he’s resigning tomorrow, that the whole situation makes him feel bad, and that he’s letting Cloud through (likely disobeying orders in the process).

As Cloud heads up the pillar, he finds Biggs and Jessie in rough condition.
If Cloud tells Biggs he still doesn’t care about the planet, Biggs comments on how Cloud hasn’t changed.
The Japanese doesn’t sound quite as negative as the English translation seems to make the line out to be. To me, it feels more like, “Ha, you haven’t changed a bit. Well, whatever. That’s fine.”

Cloud and Tifa meet up with Barret at the top of the pillar.
Though Cloud and the others assume this is a bomb, Tseng later explains that Reno actually activated the Emergency Plate Release System. So it’s not rigged to “blow” like a bomb. The Japanese here is roughly, “After all, we’d be in trouble if certain idiots could easily mess with it.”

Tseng continues on. Barret takes aim at Tseng, preparing to fire, but Tseng reveals that he’s taken Aeris hostage.
More context issues arise here, since it isn’t clear who is in danger of doing the harm. It isn’t “you might make me injure” but rather “You might injure our special guest (by blasting bullets in our direction).” (Literally, “If something like that is done, (it will) injure (our) special guest.”)

Cloud asks Tseng what he plans to do with Aeris.
Something like “Who knows?” may have been a better reading for Tseng’s response, because he isn’t actually in charge of deciding what happens to Aeris. In fact, he says in his next line that the only order they received was to capture her, emphasizing that he doesn’t know what exactly Shinra is going to do with her.
Also, the Japanese technically says nothing about her being the “last one,” just that she’s a surviving Ancient. It isn’t that big of a difference, but there is confusion later in the story over whether certain other characters are also Ancients, so it is somewhat relevant to the narrative. Of course, the characters’ limited knowledge will also play into whether they view Aeris’ as the last survivor or not. In any case, there is room for interpretation in the Japanese here that Tseng may not necessarily believe that she’s the last.

In the aftermath of the Sector 7 disaster, Barret rails against Shinra for killing so many people just to get to AVALANCHE.
To me, it feels more like Tifa is wondering to herself here, rather than accusing Barret of implying that it’s their fault. Like, “Was this our fault?” or “Does that mean this is our fault?” (Literally just: “…Our fault?”)

The crew returns to Sector 5.
This NPC is actually commenting on how the sick person didn’t react in the slightest to the plate falling. Although context issues are partially to blame, the use of ここの人 (koko no hito ; lit. “the person/people here”) should have tipped the translator off. It’s likely that a rushed schedule didn’t allow them the time to properly parse the line.

Here we see the materia shop owner’s reaction to the recent event.
Both translations take this line fairly literally. This is an idiom that doesn’t work as well in English, so it would’ve been better to rework it into something else that gets the “This place is crazy dangerous!” vibe across.
E PC does fix the last line up, though, clarifying that the shopkeeper is talking about himself. The original translation is a very literal take on the Japanese, which, you guessed it, does not include a subject.

And here’s the item shop owner’s reaction.
The way the English is worded makes it sound like Cloud or someone was trying to pay with something other than gil, but a better reading might be “As long as you give us gil, we’ll give you items. No matter what happens.” Implying that no matter how bad things get, they’ll stay in business.

This NPC is still watching the news.
He once again messes up AVALANCHE’s name, this time calling them “B-Lunch,” a reference to lunch sets sold at restaurants. The translation gets in on it this time, using “Avant-garde” as a nice substitute. 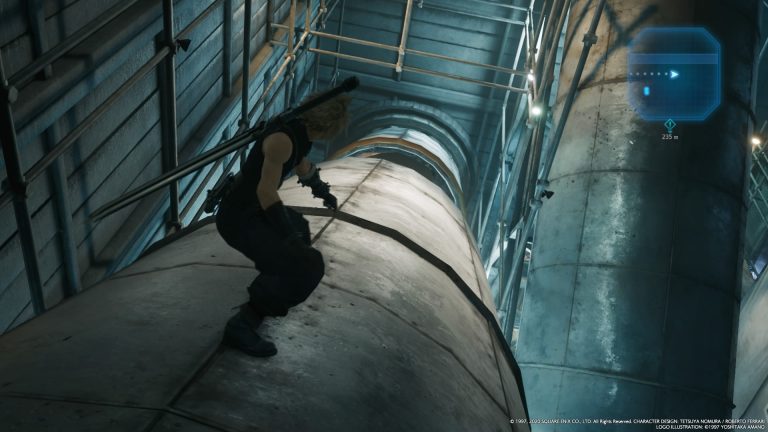 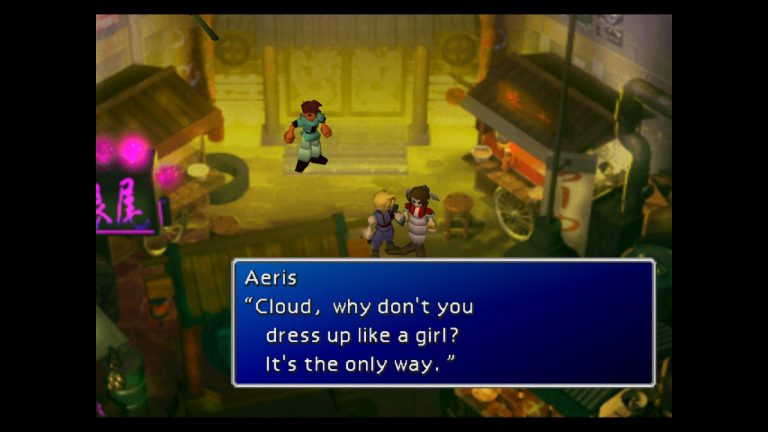 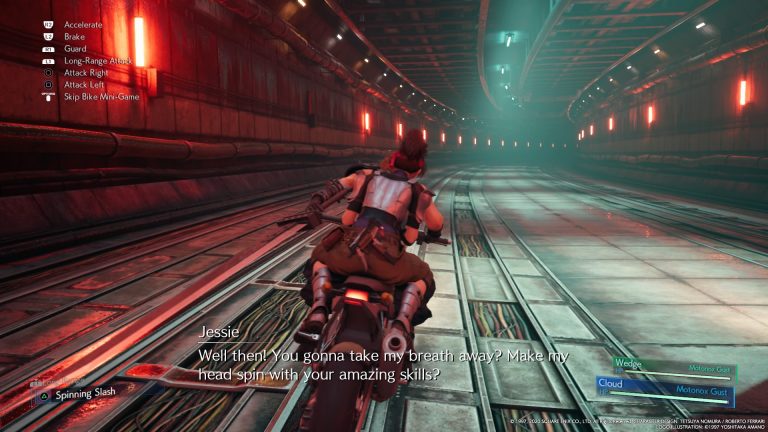 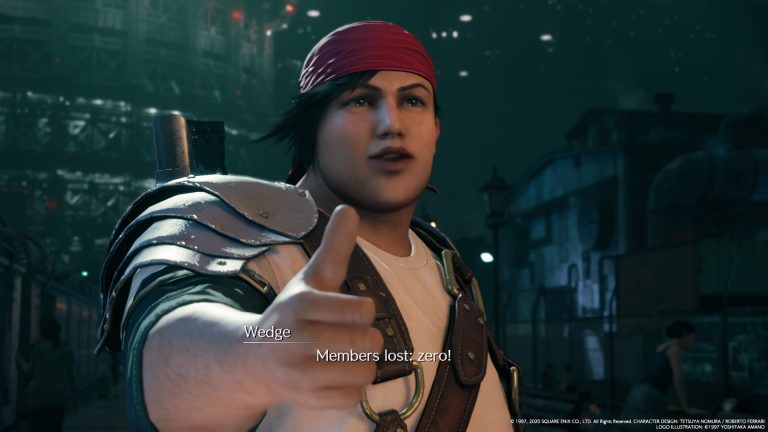