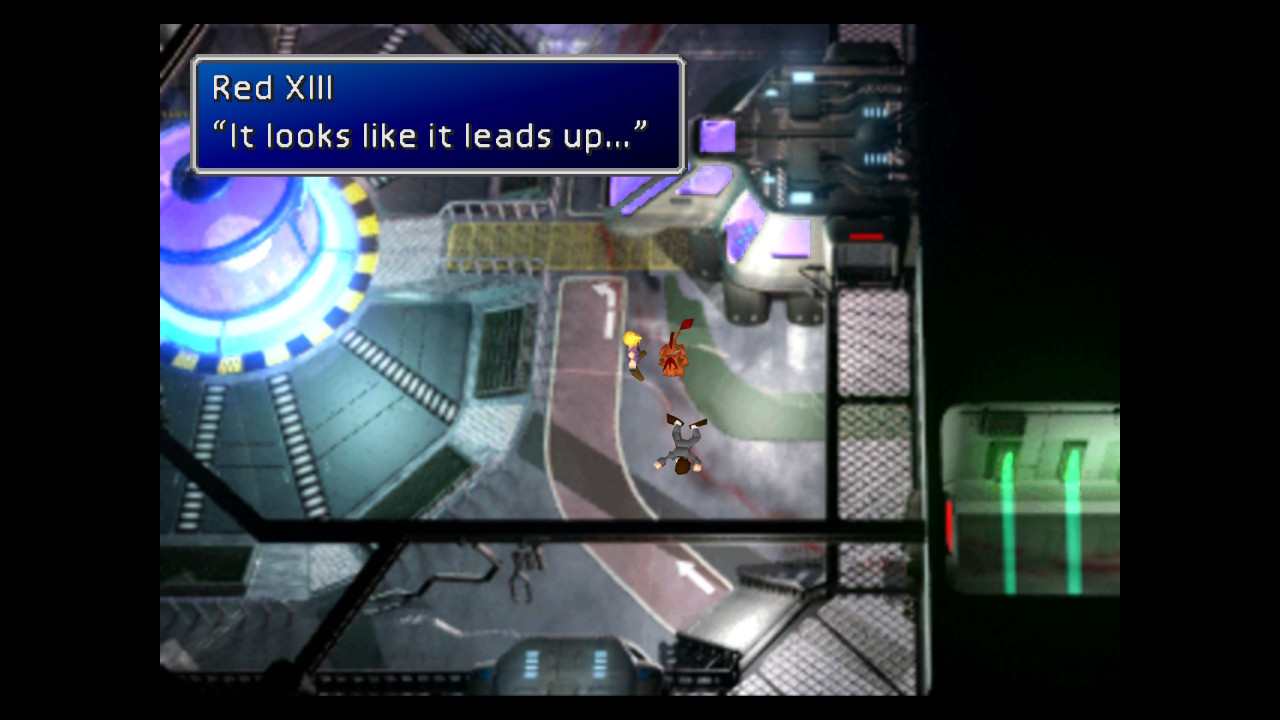 Cloud rests for a bit and wakes up to find the cell door open and the guard dead.
The use of “others” plural is a bit odd here since only Red is with Barret, but without context the translator probably didn’t know exactly who else was in Barret’s cell. This is an instance of the Japanese actually specifically pluralizing something by adding たち (tachi), instead of leaving it vague as to whether it’s singular or plural. The problem is that the -tachi suffix is often attached to names in order to say “this person and anyone else with them.” But we don’t pluralize names that way in English, so this is often translated as “<name> and the others,” which works when it’s a larger group of people, but is awkward when there’s only one other person. With more context the translator could specify both names, but otherwise another strategy is to just drop the pluralization entirely (unless it’s narratively significant or something).

Cloud and crew follow the trail.
Red is saying that whatever left the trail seemed to have some kind of specific goal /destination in mind (目的 ; mokuteki), and notices that it leads up.

The president is found murdered, and Rufus arrives.
血も涙もない (chi mo namida mo nai ; lit. “no blood or tears”) is an idiomatic expression meaning “cold-blooded/heartless.” The English goes for a literal reading, which sort of gets the idea across, but doesn’t quite leave the same impression.

The crew goes outside to confront Rufus.
Rufus is actually commenting on Sephiroth being alive (Roughly, “So Sephiroth is alive after all.”), not on his presence in Shinra HQ. Tifa asked the same thing (“Sephiroth is alive?”) just minutes ago when they found Sephiroth’s sword. These lines emphasize that people assumed Sephiroth was dead for some reason we don’t yet know about.

Rufus then launches into a speech, declaring himself the new president of Shinra.
In the Japanese, Barret seems more incredulous that Rufus names himself president so quickly after his dad died, showing just how cold-hearted Rufus is. Roughly, “(You’re gonna name yourself) president immediately after your old man died?!”
E PC cleans up Rufus’ following line a bit to use the right terminology: “inauguration.”

Rufus rants about how his father controlled the world with money.
The English here makes it sound like Rufus is saying that that would take too much effort (which is also true and completely within his personality), but in Japanese he specifies that it costs too much money to keep that up. To be fair, though, he does specify that he doesn’t want to waste money on people in his very next line after that.

Rufus then ends his speech by declaring that he’s not like his father, a line that’s missing in English.
Tifa comes back with “Your love for speeches is the same though.” The translation phrases it as a general statement so that it makes sense on its own without seeing Rufus’ “I’m not like my father” line.

Cloud tells everyone else to escape while he faces Rufus.
Another context error pops up here. The translator assumes Aeris is talking to Cloud, but really the party has just left Cloud. Aeris is saying that it looked like Cloud was deep in thought or brooding over something. Again, the relative vagueness of the Japanese is what’s causing the trip up, as the line is just “Cloud, thought hard.” It seems like the translator also missed the nuance of 思いつめる (omoitsumeru) meaning “to brood over (something), to worry too much (about),” and assumed it was a simple 思う (omou ; “to think”).

Back on the rooftop, Rufus asks Cloud why he wants to fight.
The English lumps both points of Cloud’s reply together, but the Japanese is roughly “You’re going to pursue Sephiroth so that you can get to the Promised Land.” Revealing that Shinra believes Sephiroth will lead them there.

Rufus then replies with more of a rhetorical question, “(So that means) you know Sephiroth is an Ancient?”
The only way Cloud could have guessed that Shinra’s purpose for pursuing Sephiroth was to find the Promised Land is if Cloud knew that Sephiroth was also an Ancient and thus capable of leading them to the Promised Land.
This is why the question of whether Aeris is the “sole” surviving Ancient is significant.

Cloud vaguely states that various circumstances led him to this knowledge, hinting at his past. E PSX goes for a literal translation here, which sounds a little odd in English as it doesn’t quite serve as a reply to how he knows about Sephiroth. Or at least, feels a bit non-sequitur. Something like “I’ve been through a lot” might have been better in that regard? Or like, “I have my ways”?
In any case, this slight reference is removed in E PC in favor of making Cloud sound dismissive and reserved.

Barret and the others are stuck in the lobby, facing a hoard of soldiers.
面子 (mentsu) does generally mean “honor,” but in Mahjong it refers to the lineup of players and thus it can sometimes be used to mean “a group of people.” I feel like the latter is what’s meant here. Barret can’t bust through if he has to protect two other people.

Aeris tries to tell them to run, but Barret insists on protecting her.
In Japanese, Barret’s final line here hints more at his past, roughly “I can’t let them…let Shinra do whatever they want anymore.” It seems the English translation took 好き勝手 (sukikatte ; “do whatever one wants”) and interpreted that as “playtime.”

They get ready to bust out of Shinra HQ. Barret keeps asking Tifa where Cloud is.
Tifa doesn’t really have to tell him later, because Barret is about to see where Cloud is in two seconds. So in that sense, E PC works better. The Japanese is roughly “(We’ll) talk later!”

The crew escapes Shinra HQ and talks about what they’ll do next.
E PC tweaks Aeris’ line slightly here from “want” to “need.” The Japanese is literally, “Because there are things I want to know.”

Cloud can talk to the party before heading out into the world. Barret hopes that Marlene is safe since he told Elmyra to move to a safer place.
The English isn’t all that different here, but Aeris is saying it’s perfect timing because Elmyra was recently saying that she hated Midgar.

As they get ready to leave, the girls declare Cloud the leader to Barret’s chagrin. Barret then suggests splitting into two parties.
E PC revises this line a bit, either to save some space or just to make it sound more natural.

And that concludes the Midgar portion of the original FF7! Thank you for following along. I hope you found it as enlightening as I did.
I plan to continue to examine more of FF7’s script as new chapters of Final Fantasy VII Remake are released, to keep the story fresh in mind. So keep an eye out for that! 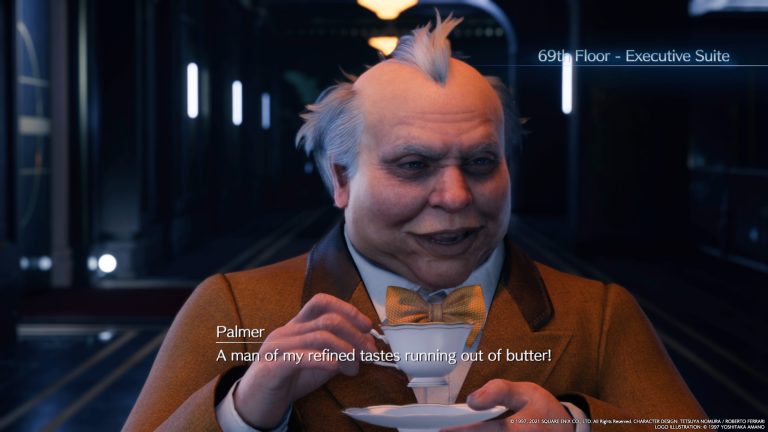 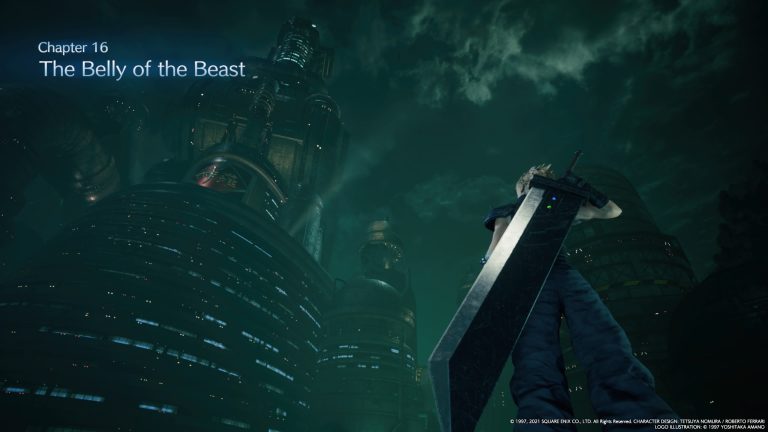 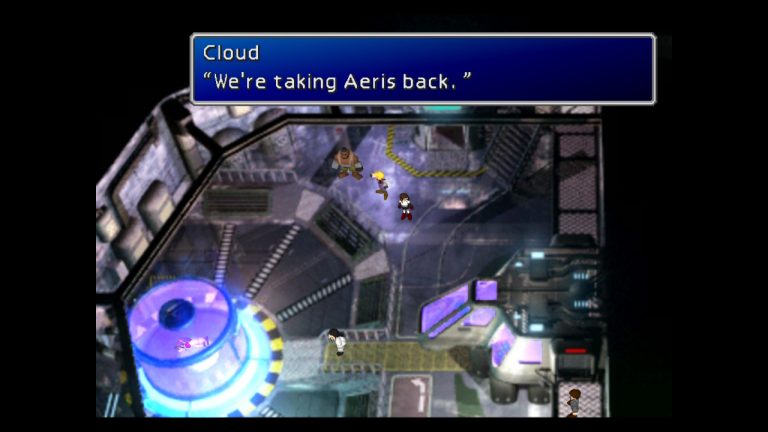